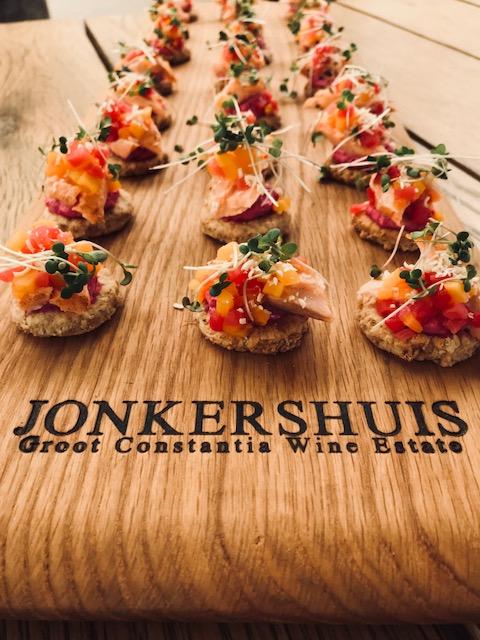 My super 7 wine tastings of the year

In 2022, local wine producers hosted major tastings for the first time in three years since the pandemic.

In an industry governed by the seasonal rhythms of the annual harvest, life slowly returned to normal during 2022. Cape wine producers who hitherto showcased their new vintage releases every year held tastings for the first time since the hiatus of the Covid-19 pandemic. Breaking the isolation of on-off lockdowns and disruptive alcohol prohibitions after more than two long years, the return to business as usual heralded the end of virtual tastings and a return to real tastings and shows.

In the big reveal at a new wave of tastings in 2022, winemakers and viticulturists spoke about what they had been up to during the interregnum. In the words of the old saying, ‘n boer maak ‘n plan. Under threat, no-one in the industry sat on their laurels. Behind the scenes, the wine industry began refocusing on the core business of wine, rethinking brand strategy, replanting vineyards, creating new tasting experiences, redesigning cellars, streamlining portfolios and searching for new channels. Cellars forced to close their doors temporarily were already planning for the grand reopening.

Covid-19 may have posed the biggest threat to the wine industry since phylloxera over a century ago. The comparison was made at a pre-2023 harvest festival in November at Groot Constantia, the oldest wine farm in South Africa. At one of the highlights of the year, speakers launched a new #HappyBirthdaySAWine campaign on social media in the build-up to the 364th wine harvest commemorative event celebrated by the estate annually on 2 February when wine was made for the first time from Cape grapes in 1659. A stunning new logo of the SA map in a wine glass was revealed.

A delightful al fresco harvest table for twenty-four guests was set overlooking the Muscat de Frontignan vineyards which are the source of the legendary Grand Constance dessert wine. Why wait until the harvest is underway to celebrate the coming vintage? Restaurateur Tammy Botbyl of Jonkershuis created a feast of seasonal colours and flavours on platters of local produce to match the flagship wines of Groot Constantia presented by a team which reveals its own longevity on this heritage estate – winemaker Boela Gerber (2001), vineyard manager Flo Beukes and GM Jean Naude. Carmen Stevens, winner of the annual visionary leadership award made at the harvest event – past winners include Nelson Mandela, Ntsiki Biyela, “the unsung wine workers”, Beyers Truter, et al – spoke about her struggle as a black woman winemaker to make her mark in the industry two decades ago. The accomplished winemaker, owner of eponymous Carmen Stevens Wines, presented two of her flagship wines paired with dishes: Carmen Stevens Sauvignon Blanc 2019 and Nemrac 2020. A chorus of inquisitive farm ducks quacked approval, the soundtrack to our fabulous lunch.

2. The five lives of Steenberg

While we’re in the Constantia Wine Valley, a tasting at Steenberg (1682) in May 2022 was another highlight on my wine calendar this year. Cellarmaster Elunda Basson, who took over at Steenberg in June 2019, six months before the pandemic, unveiled her new Bordeaux red blend called Five Lives at Tryn, one of the estate’s flagship restaurants. Chef Kerry Kilpin created a five-course lunch to match the five chapters on the back label – the same wine innovatively carries a different attribute (courage, maturity, perseverance, overcome, flourish) of feisty founding matriarch Catharina Ras.

“The pandemic was a window of opportunity to review the sustainability of the Steenberg brand,” says Elunda, “We wanted to refocus on the terroir of Cool Constantia – on Sauvignon Blanc and Merlot and the Bordeaux varieties which thrive here.” The voluptuous new red blend of Merlot and Cabernet Sauvignon tells a great story about the five lives and husbands of intrepid Catharina Ras. 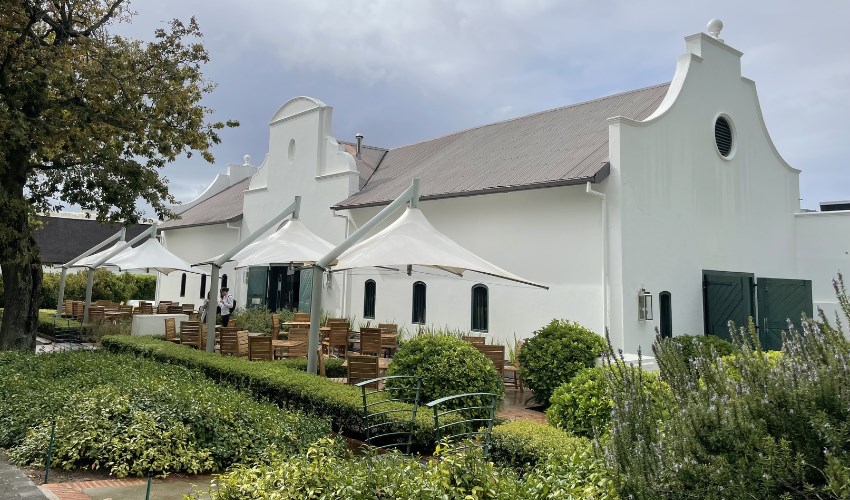 De Wetshof, a pioneer of Chardonnay from the Robertson Wine Valley, held its annual release of five expressions of Chardonnay at The Silo Hotel at the V&A Waterfront in July 2022. Traditionally one of the highlights on the annual wine calendar, this was the first major tasting in three years due to the pandemic.

Co-owner Johann de Wet declared, “Chardonnay is the hottest category in South Africa and in markets abroad.” The friendly rivalry between producers of Chenin Blanc, Sauvignon Blanc, and Chardonnay in the great varietal showdown was a noticeable trend in 2022!

De Wetshof, the producer of the first unwooded Chardonnay in South Africa back in 1992, specialises in site-specific Chardonnay which reflects the terroir of this third-generation family farm. The wines are rooted in the clonal garden of the six best clones of Chardonnay in their clonal garden, including four of their own mutations, nurtured over four decades. “Clones and limestone soils each have different personalities,” explains Johann, “We combine up to four different clones in every vineyard and wine.”

The tasting of award-winning Chardonnay under their Limestone Hill, Bon Vallon, Finesse, The Site, and Bateleur labels demonstrated the distinct fingerprint of each vineyard.

4. The big reds of Kanonkop

The first major tasting in three years in July at Kanonkop, an iconic producer of Cabernet Sauvignon, red blends and Pinotage in Stellenbosch, was another highlight of the year that was. The event marked the first major tasting at the fourth-generation family cellar in three years since the pandemic – and the twentieth vintage of Abrie Beeslaar as cellarmaster. A tasting of Kanonkop for trade and media in London in May 2022 heralded the beginning of the great post-Covid comeback. Beeslaar follows in the footsteps of great winemakers like Jan Boland Coetzee and Beyers Truter.

During the pandemic, Kanonkop focused on expanding the tasting room to build a more expansive experience, on acquiring the organic vineyards of neighbouring Laibach, on building the same brand message and on prolonging the life of prized older Cabernet Sauvignon and Pinotage vineyards through pruning. Over vertical flights of Kanonkop Kadette, Pinotage, Cabernet and Paul Sauer, from 2003 – 2020, Beeslaar comments, “Stellenbosch has a unique offering when it comes to Cabernet. We can make Bordeaux-style wines that compete stylistically on every level. Climate change plays a key role in specific drought vintages. I have the luxury of holding back vintages until they are ready.”

5. The family jewels of Simonsig

The song was the same at nearby Simonsig, another iconic family farm in the Simonsberg. Father and son Johan and Michael Malan led a vertical flight of Tiara 2002 – 2018, the estate’s flagship Bordeaux-style blend. It had been a long time coming. Consulting my library of tasting journals from 1997- 2022, I noticed that my last Simonsig Kaapse Vonkel vertical at Simonsig was in 2017 – and my last Tiara vertical in 2012. First made in 1990, Tiara is one of the Cape’s iconic red blends,built around a core of Cabernet. Johan quips “We didn’t choose Cabernet. It chose Stellenbosch”.

The journey of Tiara demonstrates the impact of evolving virus-free vineyards and gentler winemaking techniques (less extraction, less new oak) in the hands of three generations of winemakers: Johan Malan (1982- 1999), Debbie Thompson (1999 – 2019), and Michael Malan (2017). Incumbent Michael Malan says, “Our winemaking is low and slow. The style of wine the consumer wants is playing a key role”. Johan adds, “When you get excited about older wines you’re missing the point. It’s not what consumers are looking for today. We make wines a little more accessible today!” 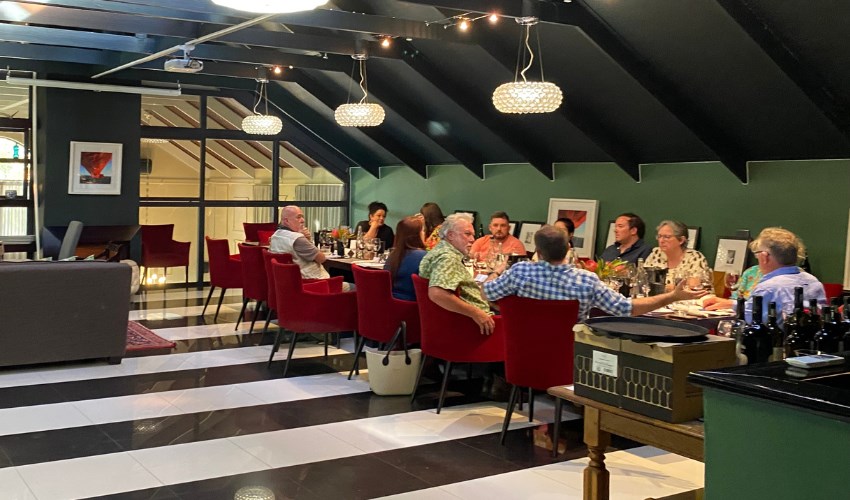 Spier celebrated the post-Covid opening up of the winelands by hosting a media day to showcase its new organic wines (Farm House, Yellow Wood), Ideology and flagship Creative Block labels. It was great to back at this heritage Stellenbosch farm (est 1700) – and to experience the renaissance of a leader in conservation, sustainability, empowerment, ethical sourcing,eco-certification, “growing for good” credo, the first winery in the world to win global vegan certification in 2019 – and FairTrade tourism. Spier ticks all the boxes as a fully woke wine farmfrom “tree-preneurs” to raptor rehab.

Revisiting Spier was a highlight of my tasting circuit in 2022. I enjoyed catching up with wine director Frans Smit, who I first met when he started as winemaker at Spier in 1995 – and new cellar master Johan Jordaan (red winemaker since 2007).

“The tourists are coming back,” declared a relieved Frans Smit – but we’ve got a way to go still to get back to our pre-Covid peak of 300 000 visitors in high season.”

”Deconstructing the vineyard in the cellar”, Johan led us through a vertical flight of one of its focus varieties from 2010 to 2020: 21 Gables Chenin Blanc made from forty year-old dryland Chenin Blanc vines. We finished with a flight of the Bordeaux-style Creative Block Five flagship.

Last but not least, making up the final of my super seven top tasting picks in 2022 was a day-trip over the berg to Paul Clüver Family Wines, pioneer of cool climate viticulture in the Elgin appellation in the early 1990s – with sixteen members, one of the smallest in the wine industry. Continuity is one of the secrets to the success of this award-winning specialist in Chardonnay, Sauvignon Blanc and Pinot Noir from its hands-on family management to cellar master Andries Burger (winemaker since 1996). Paul Clüver is also an industry leader as a WWF-SA conservation champion (since 2008) in the Groenlandberg conservancy of Kogelberg, the first Unesco biosphere declared in SA back in 1998.

Over a wonderful lunch inspired by local seasonal farm produce in the cellar-door restaurant, Paul and Liesl Clüver presented a tasting of the new releases of Sauvignon Blanc, Chardonnay and Pinot Noir under their Village, Estate and flagship Seven Flags labels.

After admiring the photographs of leopard, bat-eared fox, genet and porcupine captured on camera on the farm, we headed into the cellar to do a marvellous tasting of the components of Paul Clüver Chardonnay 2022 with winemaker Annévan Heerden (since 2016). Paul Clüver says, “Going forward, I foresee we will use more concrete eggs and foudres to build complexity in our wines from better suspension of lees”.

The new umlaut on the new vintages of the Paul Clüver wine label reflects the attention to detail at this family fruit farm founded in 1896 – reinstating the authentic spelling of the old family name. The umlaut is even burned into the lids of the new barrels.

Tasting the building-blocks of Chardonnay 2022 matured in old and new oak barrels, large foudres, cement eggs and stainless steel is a lesson in the finesse of cool climate viticulture, ranging from the nervous tension of the cement eggs and scintillating minerality of the foudres to the more evolved citrus flavour of the newer oak. Passing around samples of ferrocrete stones (koffieklip) I realise you’re never too old to learn a new trick.